The SLB-2000-100 (Survivor Locator Beacon) is designed for use in the ACES II/III and Martin Baker ejection seat packs, as well as BA-22 backstyle parachutes.  The SLB-2000-100 is a first alert device used to signal to rescue forces that an aircrew member has either ejected or bailed out of an aircraft.

In the ACES and Martin-Baker ejection seat scenarios, the SLB-2000-100 is packed in the survival kit in the seat pan.  When a pilot ejects at altitude, the pilot remains in the seat until his altitude drops below 10,000 feet.  At this time the seat separates, the parachute is deployed, and the survival pack drops below the pilot.  When the lid separates from the seat pan, the SLB-2000-100 is automatically activated.

The SLB-2000-100 can also be manually activated by a user.  The user interface is intuitive and easy to use, no matter the condition of the survivor.  The SLB-2000-100 can be used equally well with either the right or left hand, with controls large enough to be operated while wearing gloves.  Activating the beacon is simple and can be done with one hand.  For activation, the survivor turns the Function Switch to the ON position, which immediately activates the beacon.  Visual indications of both beacon activation and GPS fix are provided.  The beacon can be switched off by the rescue crew after the survivors have been rescued or by the survivors if multiple beacons are active.  A beacon that has been turned off can be reactivated by turning the Function Switch to the ON position.  The safety lanyard can be attached to the user's equipment to ensure that the beacon is not lost or otherwise separated from the person in distress.

The SLB-2000-100 provides world-wide alerting in emergency situations via a network of satellites of the Cospas-Sarsat distress alerting system.  This system enables the location, nationality, unit serial number, and user specific registration data of the personal locator beacon to be immediately identified with the receipt of the alert.

The SLB-2000-100 is designed primarily for use by militaries around the world.  The beacon has an aluminum enclosure, and is designed to withstand the rigors of severe outdoor use.  The integral GPS receiver provides immediate position information to an accuracy of nominally 120m. It is fully waterproof to 10m, operable within the -20°C to +55°C temperature range.  This ensures that should a survivor need help, the message will get through. 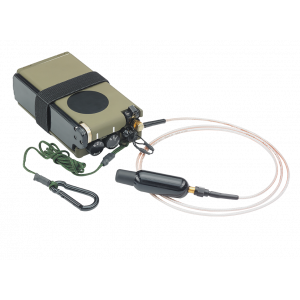 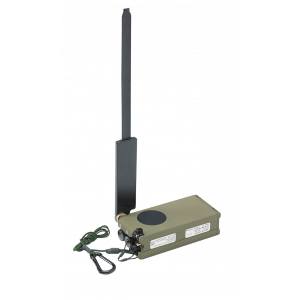